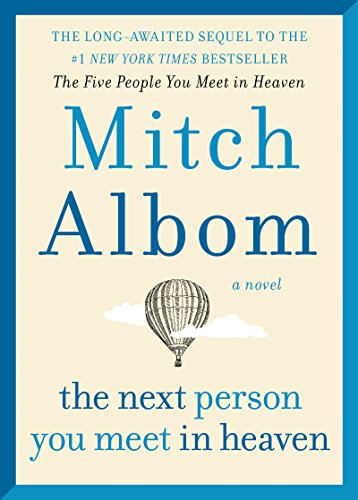 I sent those three words and a picture of Mitch Albom’s book, “The Next Person You Meet In Heaven” to my best friend, just two days after the novel arrived on bookshelves. We exchanged words of giddy elation, sent a few dozen exclamation points back and forth before I put my phone away and dove into this highly anticipated story.

“The Five People You Meet In Heaven” is one of my all-time favorite books: Reading it years ago was a religious experience. Some of the book’s simple quotes have gotten me through some of the highest highs and lowest lows of young adulthood- While most people became Mitch Albom fans after “Tuesdays With Morrie,” this one sealed the deal for me.

So after I breezed through 224 pages toward the back cover of “The Next Person You Meet In Heaven,” I called my best friend who also adored the prequel. “I’m not going to tell you anything,” I said, “But I am definitely interested in knowing what you think.” Three days later, she was done with the book and responded with, “You tell me first.”

Truth is, I really wanted to love this book. The characters in “The Five People” had so much depth, were so raw, that it was impossible not to love them, sympathize with them, pity them. Eddie was someone that could be adored for his unwavering love and adoration for his wife… His father was so cold that the reader of the book could actually feel the hollowness of that relationship. The heroic and flawed traits of the characters were what made them so relatable; They tugged at heartstrings and penetrated the soul.

I was surprised then, to gloss over “The Next Person” without so much as a tear. Annie’s life was spared after a tragic accident involving Eddie, the main character in the first book; The sequel gives us a glimpse into Annie’s life of stacked tragedies before meeting her own fate on the other side- she too is introduced to five people that teach her lessons and infuse some of the more difficult times of her life with meaning. In my opinion though, some of the characters were shallow in complexity and description and I found it difficult to relate. In the first book, I wrote down- at least- a quote per chapter for safe keeping. There weren’t too many “aha” moments this time for me.

Perhaps it was the hype that I created, though- My dissatisfaction could be my own doing with sights set too high. Regardless, the storyline was decent and as always, Mitch Albom has a gift for sweeping a reader up with beautiful imagery and breezy vernacular. It was an easy read that left me content- not satisfied, but content- at the end.

BEST FOR: Mitch Albom Fans, Because You Gotta Read Them All

NOT GOOD FOR: I Think Anyone Can Read This And Appreciate Mitch’s Artistry… I’m Curious To Hear What Other Fans Think.

IF THIS BOOK/ AUTHOR WAS A HIGH SCHOOL STEREOTYPE: The Underdog

One thought on “| Checked Out: October Book Review- The Next Person You Meet In Heaven |”

Daydreams from a distance.
Confession: I read parts of this book in high school but didn’t finish it, let my love for the time period sweep me up in the storyline and became somewhat enthralled with the “idea” of the book. I loved the covers, the Art Deco style, and how it oozed of “Jazz Age” cool. I started to collect them. I read other books on the Fitzgerald’s (highly recommend “Z: The Story Of Zelda Fitzgerald”) watched all movie adaptations of the novel on repeat, even threw a Gatsby NYE party a few years ago, donning a Daisy-inspired ensemble. It became one of my unexplained obsessions. 🤷🏻‍♀️
Hello everyone! I am tossing my name into the February #BookstackChallenge mix- there are some good ones out there!
🤍 loving in lowercase 🤍
📚✨ Free Books ✨📚
Whew! I’m all caught up and am pleased to say that “The Once And Future Witches,” by @alix.e.harrow, is now up on the blog. I still cannot sing its praises enough, I am so happy that I have a hardcover copy because I will certainly be going back and re-reading, even just for the fairy tale retellings: Hansel & Gretel, Rapunzel... what an interesting way of highlighting magical folklore. 🪄
%d bloggers like this: