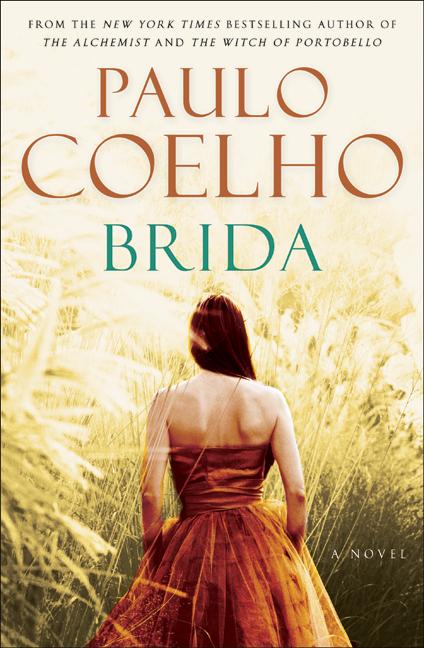 After I fell in love with “The Alchemist,” by Paulo Coelho at the beginning of the year, his name caught my eye while scanning library shelves on my last visit. I picked up “Brida” and the back cover sounded interesting enough to check the book out: It foreshadowed, according to the summary, “a tale of love, passion, mystery, and spirituality.” It only took me 163 pages of “The Alchemist” to learn that those genres were Coelho’s forte, so I was excited to dive in.

The main character, Brida, was a young Irish girl who was interested in becoming a master in magic. She sought out assistance and support from two advisors, The Magus and Wicca, who helped shape her journey and shared with her, some of Life’s most incredible truths.

I loved that the story was rich in concepts such as charmed enchantment and theological divine elements- it combined several religions in a way that transcended religion itself, spoke only of universal truths. More than faith and spirituality, however, I scribbled down quotes that referenced more common, secular words to live by: Brida’s teachers advised on physical appearance, arousal and primal powers, and the lesson I loved the most- a message regarding finding one’s Soul Mate. Brida was especially interested in learning more about such a monumental task, already involved with one man but growing more intrigued by The Magus. Her other teacher, Wicca, described the sentiment in great detail, in a way that I found wildly poetic. “The answer is simple,” she began.

“In certain reincarnations, we divide into two. Our souls divide as do crystals and stars, cells and plants. Our soul divides in two, and those new souls are in turn transformed into two and so, within a few generations, we are scattered over a large part of the Earth.”

“We form part of what alchemists call the Anima Mundi, the Soul of the World. The truth is that if the Anima Mundi were merely to keep dividing, it would keep growing but it would also become gradually weaker. That is why, as well as dividing into two, we also find ourselves. And that process of finding ourselves is called Love. Because when a soul divides, it always divides into a male part and a female part. That’s how the Book of Genesis explains it: the Soul of Adam was split in two, and Eve was born out of him.”

“In each life, we feel a mysterious obligation to find at least one of those Soul Mates. The Greater Love that separated them feels pleased with the Love that brings them together again.”

And how do we do that? Brida asked.

“By taking risks. By risking failure, disappointment, disillusions, but never ceasing your search for Love. As long as you keep looking, you will triumph in the end.”

The book talks about realizing multiple soulmates, resisting them, surrendering to them. And then, we follow Brida as she fulfills her own destiny.

The book was well done, another easy read that undoubtedly feels like a story. It’s given me confidence to pick up another one of Paulo Coelho’s books- Perhaps he will be another Mitch Albom for me; a staple in my circulation.

NOT GOOD FOR: Skeptics

IF THIS BOOK/ AUTHOR WAS A HIGH SCHOOL STEREOTYPE: Brida would be a good witch.

Daydreams from a distance.
Confession: I read parts of this book in high school but didn’t finish it, let my love for the time period sweep me up in the storyline and became somewhat enthralled with the “idea” of the book. I loved the covers, the Art Deco style, and how it oozed of “Jazz Age” cool. I started to collect them. I read other books on the Fitzgerald’s (highly recommend “Z: The Story Of Zelda Fitzgerald”) watched all movie adaptations of the novel on repeat, even threw a Gatsby NYE party a few years ago, donning a Daisy-inspired ensemble. It became one of my unexplained obsessions. 🤷🏻‍♀️
Hello everyone! I am tossing my name into the February #BookstackChallenge mix- there are some good ones out there!
🤍 loving in lowercase 🤍
📚✨ Free Books ✨📚
Whew! I’m all caught up and am pleased to say that “The Once And Future Witches,” by @alix.e.harrow, is now up on the blog. I still cannot sing its praises enough, I am so happy that I have a hardcover copy because I will certainly be going back and re-reading, even just for the fairy tale retellings: Hansel & Gretel, Rapunzel... what an interesting way of highlighting magical folklore. 🪄
Loading Comments...
%d bloggers like this: