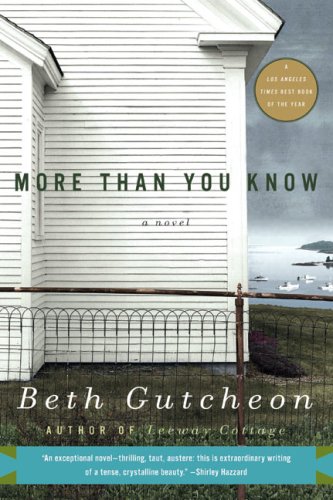 It’s a cold, snowy night in Virginia and I am compelled to cozy up with a blanket and jot down a few thoughts about the book I just finished, “More Than You Know,” by Beth Gutcheon.

The story unfolds in Dundee, Maine; An old woman confides in the reader immediately by declaring an eery revelation: “Somebody said ‘true love is like ghosts, which everyone talks about and few have seen.’ I’ve seen both and I don’t know how to tell you which is worse.” She then takes her listeners back in time to a summer where she met the only man who truly ever understood her, the man who still shares all of her secrets.

Hannah was a complex character, a strong-willed teen who was often misrepresented by her stepmother. Yearning to find an escape to her caregiver’s scrutiny, she accepted an invitation by town “bad boy” Conary Crocker, who inquired about exploring the shores of Dundee on a hot summer day. The journey became much more than that, however; Friendship quickly morphed into mutual adoration, and the two set sail on abandoning the world they knew in hope of creating a new one of their own.

But the young couple had more in common than they bargained for: Hannah’s mother loved to rent a former schoolhouse in town and one night, Hannah saw a ghost that was still inhabiting the space. No one else believed her premonitions except for Conary, who had seen the ghost before himself.

The book weaves an old ghost story through the modern love tale, centuries later, and I must say that the author captures both depictions in the most impeccable way. Although I had trouble following the introductions in the first thirty pages or so, the rest of the book was an effortless read. Gutcheon’s main characters were messy, a little broken, but lovable in their quest for a better life. Her ghost was equally broken in a different sense- as the story comes to its climax the reader begins to understand why the spirit has not yet moved on. I am not usually a suspense or horror reader but this book was subtly haunting. The eeriness crept up on me and then I couldn’t put the book down, eager to get to the end in the same night so I wouldn’t have nightmares. It was a 2AM, under the covers with my iPhone flashlight kind of read, and I am not ashamed of that- The book was worthy.

FINAL SCORE: 3.5: A chilling ghost story- Very well written. I got this book for $1.75 at my secondhand book store and didn’t have high expectations- The author is now a name that I will look out for.

NOT GOOD FOR: The Easily Spooked.

IF THIS BOOK/ AUTHOR WAS A HIGH SCHOOL STEREOTYPE: The Misunderstood “Bad Girl.”

**Want to see what I’m reading next? Find me on GoodReads and join the 2019 challenge with me! https://www.goodreads.com/addingpunctuation**

Daydreams from a distance.
Confession: I read parts of this book in high school but didn’t finish it, let my love for the time period sweep me up in the storyline and became somewhat enthralled with the “idea” of the book. I loved the covers, the Art Deco style, and how it oozed of “Jazz Age” cool. I started to collect them. I read other books on the Fitzgerald’s (highly recommend “Z: The Story Of Zelda Fitzgerald”) watched all movie adaptations of the novel on repeat, even threw a Gatsby NYE party a few years ago, donning a Daisy-inspired ensemble. It became one of my unexplained obsessions. 🤷🏻‍♀️
Hello everyone! I am tossing my name into the February #BookstackChallenge mix- there are some good ones out there!
🤍 loving in lowercase 🤍
📚✨ Free Books ✨📚
Whew! I’m all caught up and am pleased to say that “The Once And Future Witches,” by @alix.e.harrow, is now up on the blog. I still cannot sing its praises enough, I am so happy that I have a hardcover copy because I will certainly be going back and re-reading, even just for the fairy tale retellings: Hansel & Gretel, Rapunzel... what an interesting way of highlighting magical folklore. 🪄
Loading Comments...
%d bloggers like this: